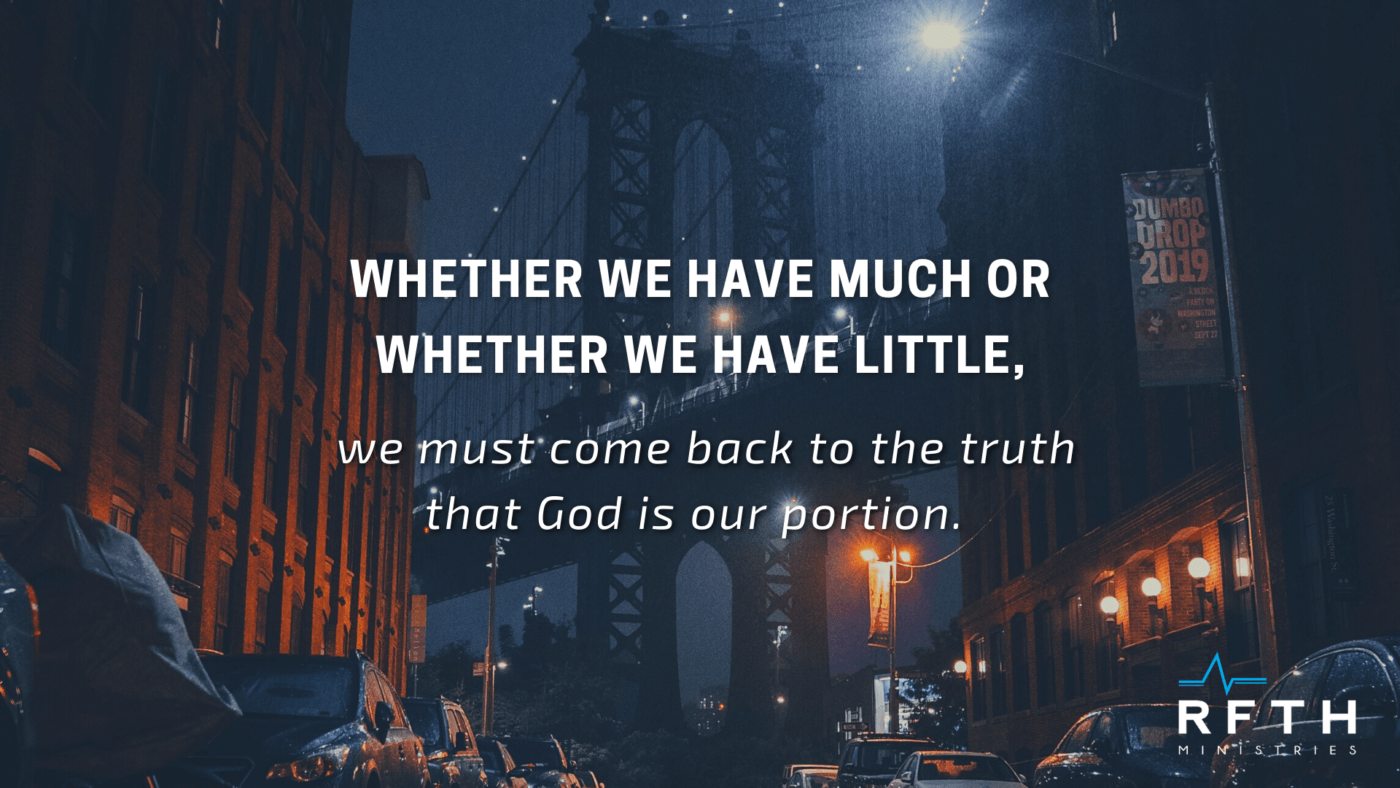 God is Our Portion

“Whom have I in heaven but you? And earth has nothing I desire besides you. My flesh and my heart may fail, but God is the strength of my heart and my portion forever.” Psalm 73:25-26

When we think about the word portion, we think about something allocated to us. It’s a part of a whole, divided among a few or many. And if you have kids, you know that a portion is often disputed.

Yes, we have trouble with portion sizes, even as adults. What makes us struggle like that? What makes us buck against our portion, whether the portion is a portion of finances, of food, of resources, or of work? Many things to be sure, but perhaps one of the things driving that resistance is our sense of entitlement. It’s the idea that we deserve more or deserve less, depending on what’s being portioned out. In either case, the amount of our portion is somehow unfair.

This is at least part of what’s at the core of Psalm 73. It’s a psalm of struggle; a song of complaint against the perceived unfairness of what the psalmist saw playing out before him. Asaph, the writer of the psalm, looked around him and saw that the wicked were prospering. There were not only no apparent consequences to their actions; it seemed as though their circumstances were continually improving. By contrast, he looked to the lives of the faithful and saw difficulty. Suffering. Hardship. And he could not reconcile the portion of each.

That was, until, he gained the kind of perspective that only comes when one comes into the presence of God. And having done that, Asaph had an eternal bent on his perspective, and that’s when we get the mighty declaration of the psalm – that for the people of faith:

This is a grace-fueled kind of contentment – one that comes when we stop comparing our portion sizes of stuff to that of others and instead remember that through Jesus, we can have the greatest portion of all. Only through Him does our portion become…God.

When our portion is small, we might feel like we deserve more. And when there is a time our portion is large, we no longer feel that we have need for God. We replace Him with lesser portions over and over again.

In either case – whether we have much or whether we have little – we must come back to the truth that God is our portion. Whether big or small, the earthly portions we have been allocated are all too vulnerable. But thank God for Jesus who has secured something better and longer-lasting for us in Him.

He has secured our portion in God.