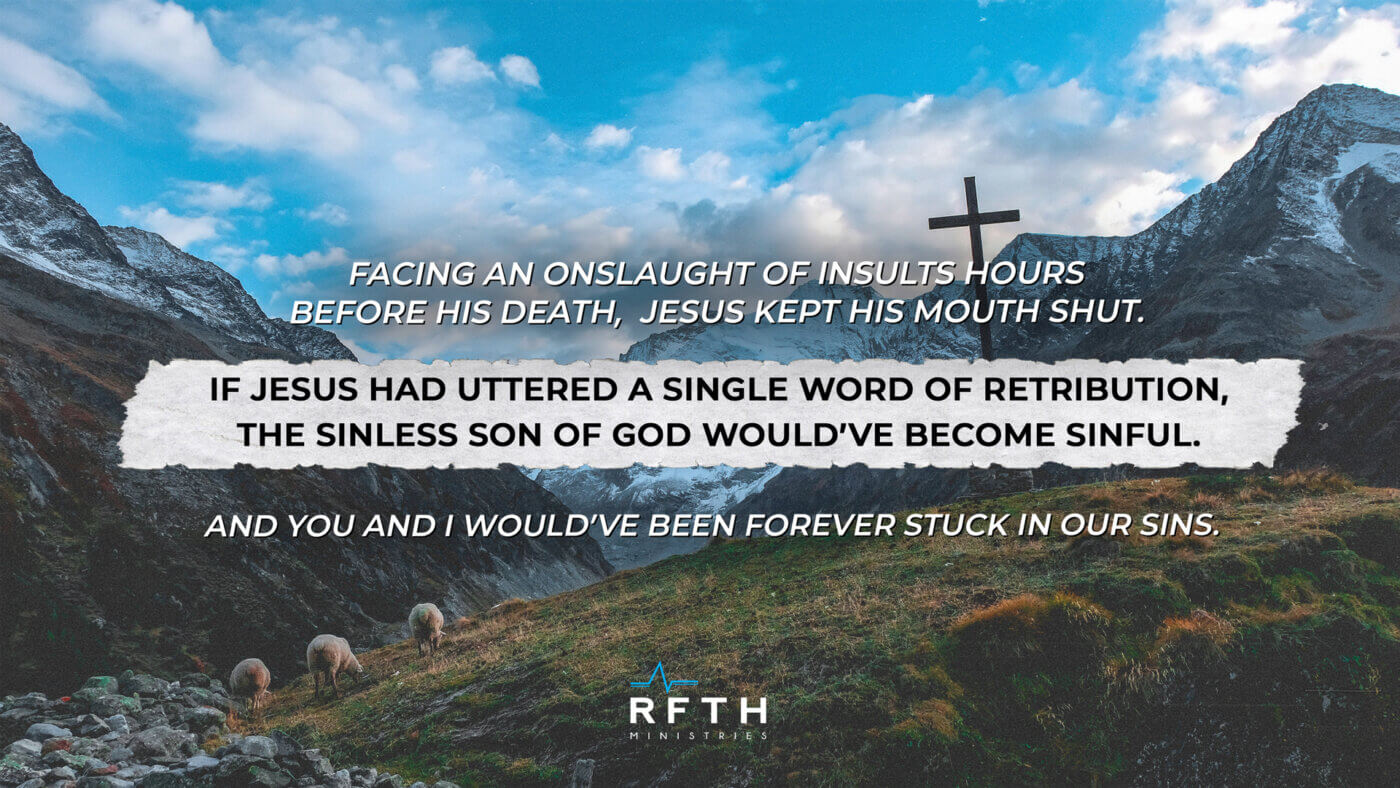 What are the cruelest words anyone has ever said to you?

That’s why I’ve always thought the expression, “sticks and stones may break my bones, but words will never hurt me” is a boldfaced lie.

We all know that words can hurt.

The question becomes – how do we respond when they do?

It’s only natural to erupt in retaliation, lashing out at the one whose words wounded our soul.

But that is not the way of Jesus.

You see, facing an onslaught of insults hours before His death, Jesus kept His mouth shut.

Isaiah prophesied, “He was led like a lamb to the slaughter, and as a sheep before its shearers is silent, so He did not open His mouth” (Isaiah 53:7). This would be remarkable, especially realizing that these would be the darkest, most sinister hours in the history of mankind.

During these hours, Satan unleashed a barrage of attacks against the Son of God and the Jewish guards threw some of the hardest punches. Acting as agents of Satan himself, they mocked Jesus’ divinity and pummeled Him with their fists (Luke 22:63,64).

And while the guards pounded on Jesus, they “insulted” or “blasphemed” Him with a relentless stream of vile, hateful words (Luke 22:65). (To blaspheme literally means, “to speak evil against another person.”)

These guards were committing the worst act of blasphemy imaginable:

THEY HIT GOD IN THE FACE.

THEY SPOKE EVIL AGAINST THE LITERAL SOURCE OF GOODNESS.

And they never even realized what they were doing.

It wasn’t easy for Jesus to remain silent. While He was fully God, He was also fully man. And as a man, Jesus was in unimaginable pain.

I don’t know about you, but I have trouble controlling my tongue when I’m hungry or have a headache. Facing the physical and emotional anguish that Jesus faced, I’m afraid venom would have spewed from my mouth in a matter of seconds.

Yet, one pastor puts it this way, “we are most like Christ when we are silent during an attack.”

Let’s stop and think of what hung in the balance here:

If Jesus had uttered one single word of retribution, the sinless Son of God would’ve become…sinful.

Satan would’ve won not just the battle, but the war.

And you and I would’ve been forever stuck in our sins.

So, this Easter season, continue to cherish all the words of Jesus.

But I, for one, will also cherish what He didn’t say.