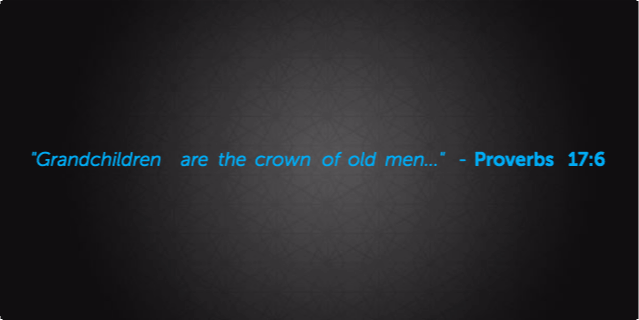 “Grandchildren are the crown of old men…” – Proverbs 17:6

Isn’t it amazing how the normal conflicts in the parent-child relationship don’t seem to be a problem between grandparents and grandchildren? Now, grandparents may have old-fashioned values, but they’re loved and admired by their grandchildren.

What do you think of when you think of a beloved grandparent? Even hardened cynics often get misty-eyed when recalling memories of a grandparent, and yet grandparents are often the forgotten victims of divorce and separation. In June of 2000, the Supreme Court defended the parents’ right to restrict or cut off ties with the grandparents of their children. Such a sad state of mind.

Parents, let’s do all we can to enhance the relationship between our children and their grandparents. It’s part of their heritage that they need to understand. It’s part of their identity that makes them whole. God’s Word says, “Grandchildren are the crown of old men.” (I’m quite sure this applies to old women, as well!) If at all possible, don’t deny them their crown.