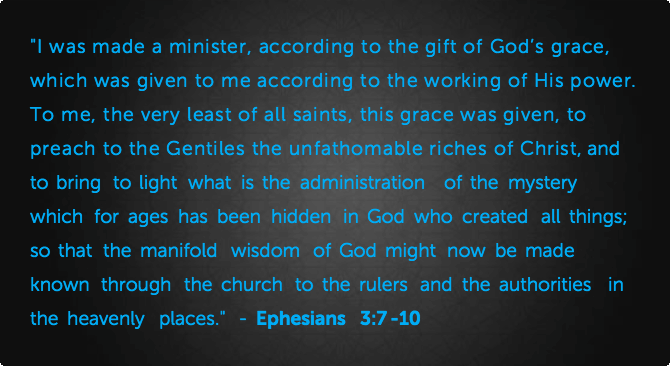 “I was made a minister, according to the gift of God’s grace, which was given to me according to the working of His power. To me, the very least of all saints, this grace was given, to preach to the Gentiles the unfathomable riches of Christ, and to bring to light what is the administration of the mystery which for ages has been hidden in God who created all things; so that the manifold wisdom of God might now be made known through the church to the rulers and the authorities in the heavenly places.” – Ephesians 3:7-10

I was sitting in a Rotary Club meeting. It was the late 1980s. The man that was giving the talk that day was from a new and very small division of BellSouth called BellSouth Mobility. And he held up a Seinfeld-sized cell phone and said, “Folks, it won’t be long before all of you have one of these.” Then he said something really outrageous. “Not only that. It won’t be long before you’ll be using one of these more than your landlines, because we believe that we have an unstoppable mission to get one of these in every one of your hands.”

Many snickered that day and thought, “That will be a really long shot.” Yet, he was exactly right. Even though cell phones are not Seinfeld-sized, we would be hard pressed to find anyone reading this that doesn’t use a cell phone far more than a landline. It was really an unstoppable mission that has been fulfilled.

Jesus began an unstoppable mission that continues to this day as thousands of missionaries live all over the world, striving to fulfill Jesus’ commission. Yet, you don’t have to go to another country to be part of this effort to share the Good News of Jesus Christ. We have signs posted at the exits to our church parking lots that read, “You are now entering the mission field.” That means that our neighborhoods, our friends and families, co-workers, even people we might meet today are our mission field. The church’s unstoppable mission is to take the Good News to EVERYONE. It is the most important work on the face of the earth. So, followers of Jesus, it’s time to get started!